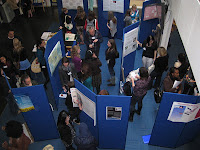 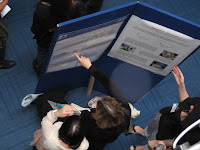 But other than the gender ratio, it looked and felt just like any other academic conference and the standard of work was very high. There were a mix of motivational talks and technical talks, and an excellent poster session. I was one of the judges for the masters poster competition and it was a really difficult decision. Each of the poster presenters was able to tell us in enthusiastic detail about their work and ideas, and several of them had brought along demos. We eventually awarded that prize to a poster from Wuraola Jinadu from Robert Gordon Uni in Aberdeen who was creating an iPad app for designing UML diagrams.
Posted by Amanda Clare at 16:57