Turing sunflowers are beginning to flower

0 has opened her flower. 1 broke in the wind and had to be replaced, but now she's catching up. 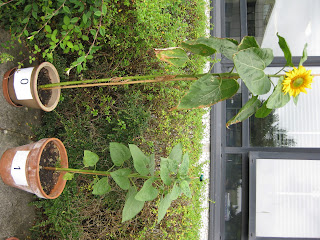 And 0 and 1 now have a sister sunflower: 10, who is leaning a little, losing her petals, and starting to set seeds. 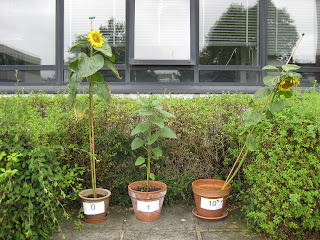 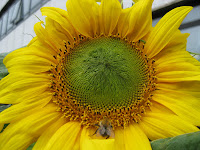 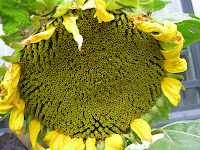 There is a growing awareness that scientists and engineers should be better at communicating their work to the public (and to policy makers). It's not enough just to do good science if no one knows about it.

The excellent Sixty Symbols project has scientists at Nottingham Uni making videos about interesting aspects of physics and astronomy. There are Science Cafes (or Cafe Scientifiques) around the country to chat about science in a mixed audience. As part of our current research project we're going to make an online bioinformatics activity that can be used in schools to teach children about binary numbers, rules and about how genome translates into phenotype. BCS Mid-Wales have recently had two successful show-and-tell events where robots, games, and technology were proudly shown and enjoyed. And we've just had a student develop a fantastic HTML5/Javascript game to demonstrate evolution in partially selfing fish populations (you have to breed a bigger population than your competitors and not get infected).

Here in Aberystwyth we have an Arts Centre with multiple galleries where I can see stunning photography, paintings and prints, Ceredigion museum which shows me what amazing outfits people used to wear when bathing, and how huge telephone cables used to be, and we have more libraries than most towns, including the university libraries, a town library and the National Library of Wales. But we don't have a place I can go on a rainy Saturday afternoon to browse science. I can read about science in the library, but that's not the same thing. I'd like to see Science Galleries in every town.
Posted by Amanda Clare at 18:06 No comments: