Posted by Amanda Clare at 12:54 No comments:


Whenever I write code in Haskell instead of other programming languages, it feels cleaner. Not just more elegant, but also more obviously correct. And that's not just about the lack of side effects and mutable variables. Haskell has stronger typing, which gives the programmer many guarantees and allows you to express more information about the code. It also has tools such as QuickCheck, in which you can state and test further properties that you believe to be true.

We wanted to bring these ideas to the area of laboratory automation. We've had some fairly large and complex lab automation systems in our lab over the years, with multiple robot arms, and dozens of devices to be serviced. These robot arms pass plastic plates containing yeast around incubators, washers, liquid handlers, centrifuge devises and so on. If the plates get deadlocked or left out of the incubator for too long because scheduling operations went wrong, then the experiment is ruined. However, this can happen if the scheduler needs to be able to make decisions on the fly during the experiments. It may need to decide what to do next based on the current instrument readings and current system capacity. So either you make a scheduler that's so simple that you know exactly what it will do in advance (but it can't do the workflow you really need), or you make a scheduler that's complex and flexible, but it's very difficult to analyse its properties. Hmm, I think Tony Hoare already suggested that choice.

This paper was written by the three of us, coming together with three very different perspectives. Colin is a functional programming researcher at the Uni of York who enjoys opportunities to demonstrate the benefits of FP in real world problems. Rob works for PAA, an excellent lab automation company, who build complex bespoke systems (and software) for their clients. They built one of our lab automation systems. I'm both a user of such lab automation systems, and also a user of Haskell, without ever actually being an FP researcher.

The code is available as a literate Haskell file. The entire code is in this file, along with a complete description of what's going on and how it all works, and this file can easily be turned into a readable PDF document (which also includes all the code). https://github.com/amandaclare/lab-auto-in-fp

This year, 2014/2015, we started a new MSc course: Statistics for Computational Biology. We can see that there's a huge demand for bioinformaticians, for statisticians who can read biology, and for programmers who know about statistics and can apply stats to biological problems. So this new MSc encompasses programming, statistics and loads of the current hot topics in biology. It's the kind of MSc I would have loved to have done when I was younger.

As part of this degree, I'm teaching a brand new module called Programming for Scientists, which uses the Python programming language. This is aimed at students who have no prior programming knowledge, but have some science background. And in one semester we teach them the following:
We taught it as a hands-on module, lectures held in a room full of computers, programming as we go through the slides, with exercises interspersed and demonstrators on hand to help.

We had students sign up for this module from a surprisingly diverse set of backgrounds, from biology, from maths, from geography and even from international politics. We also had a large number of staff and PhD students from our Biology department (IBERS) who wanted to sit in on the module. This was a wonderful group of students to teach. They're people who wanted to learn, and mostly just seemed to absorb ideas that first year undergraduates struggle with. They raised their game to the challenge.

Python's a great language for getting things done. So it makes a good hands-on language. However, it did highlight many of Python's limitations as a first teaching language. The objects/functions issue: I chose not to introduce the idea of objects at all. It's hard enough getting this much material comfortably into the time we had, and objects, classes and subclasses was something that I chose to leave out. So we have two ways to call functions: len(somelist) and somelist.reverse(). That's unfortunate. Variable scoping caught me out on occasion, and I'll have to fix that for next year. The Python 2 vs Python 3 issue was also annoying to work around. Hopefully next year we can just move to Python 3.


What impressed me most was the quality of the final assignment work. We asked the students to analyse a large amount of data about house sales, taken from http://data.gov.uk/ and population counts for counties in England and Wales taken from the Guardian/ONS. They had to access the data as XML over a REST-ful API, and it would take them approximately 4 days to download all the data they'd need. We didn't tell them in advance how large the data was and how slow it would be to pull it from an API. Undergrads would have complained. These postgrads just got on with it and recognised that the real world will be like this. If your data is large and slow to acquire then you'll need to test on a small subset, check and log any errors and start the assignment early. The students produced some clean, structured and well commented code and many creative summary graphs showing off their data processing and data visualisation skills.

I hope they're having just as much fun on their other modules for this course. I'm really looking forward to running this one again next year.
Posted by Amanda Clare at 17:19 No comments:

1) The Mary Anning fossil hunting round
A huge word search with many words related to Mary Anning's work and fossils to find (including "ichtheosaur" and "she sells sea shells", "on the sea shore".

2) The Amelia Earhart aviation round
Create paper aeroplanes that will travel from Europe (over here) to America (over there) and land within an area marked by a hula hoop. We should have had planes crossing the Atlantic in the other direction, but oh well, we're in west Wales.

3) The Caroline Herschel stargazing round
Early astronomy was often about spotting small differences in maps of the heavens. Thanks to heavens-above.com we had a copy of the sky map for the evening, and another copy that had been modified with gimp. Spot the difference! Three Gemini twins?

4) The Barbara McClintock genome round
Here we used C. Titus Brown's shotgunator to make a set of short reads from a few sentences about the work of Barbara McClintock. The teams had to assemble the genome to decipher the sentences. It must have seemed as if transposons were at work, because with a few repeated words the sentences they were constructing did get rather jumbled. 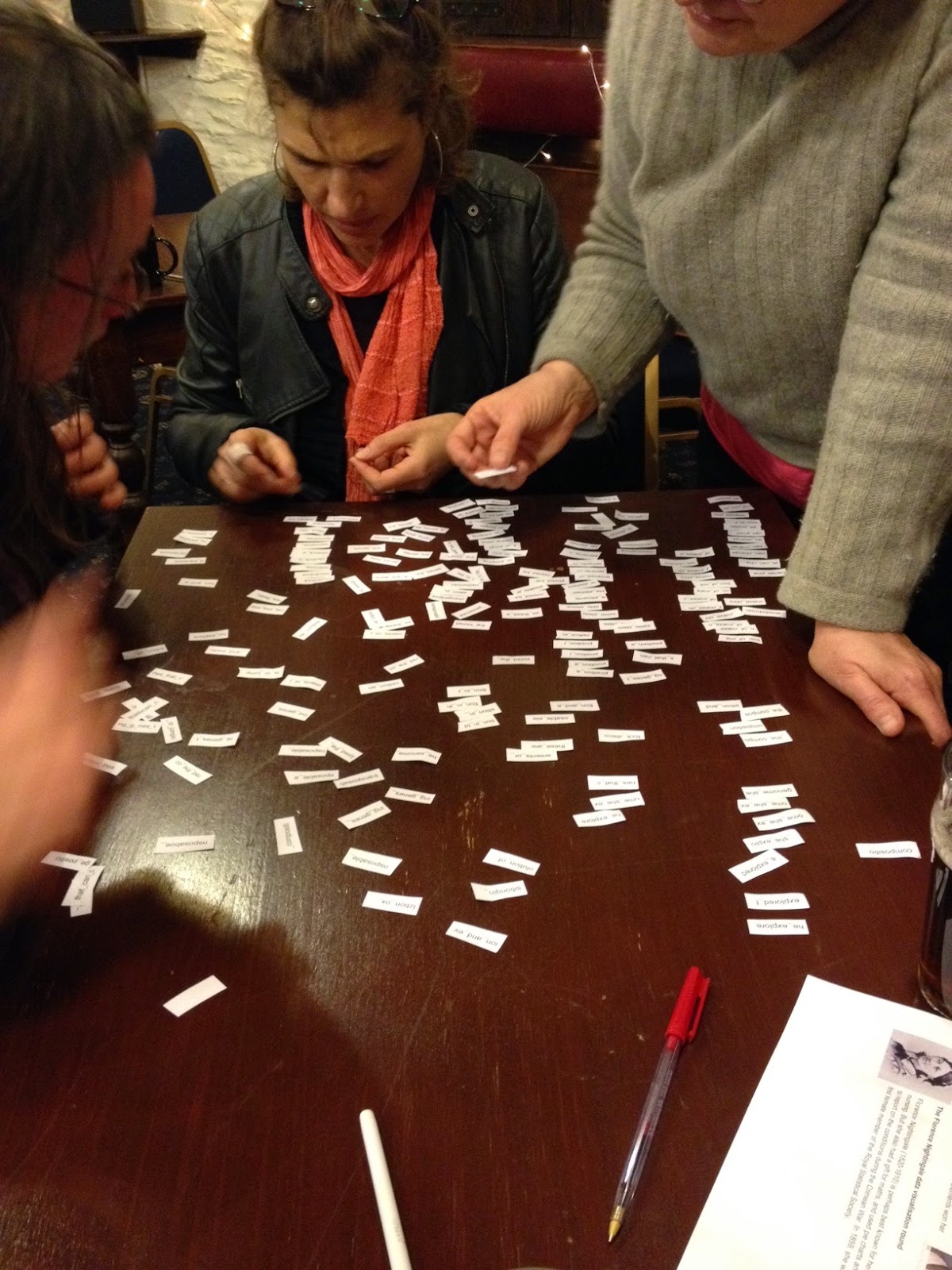 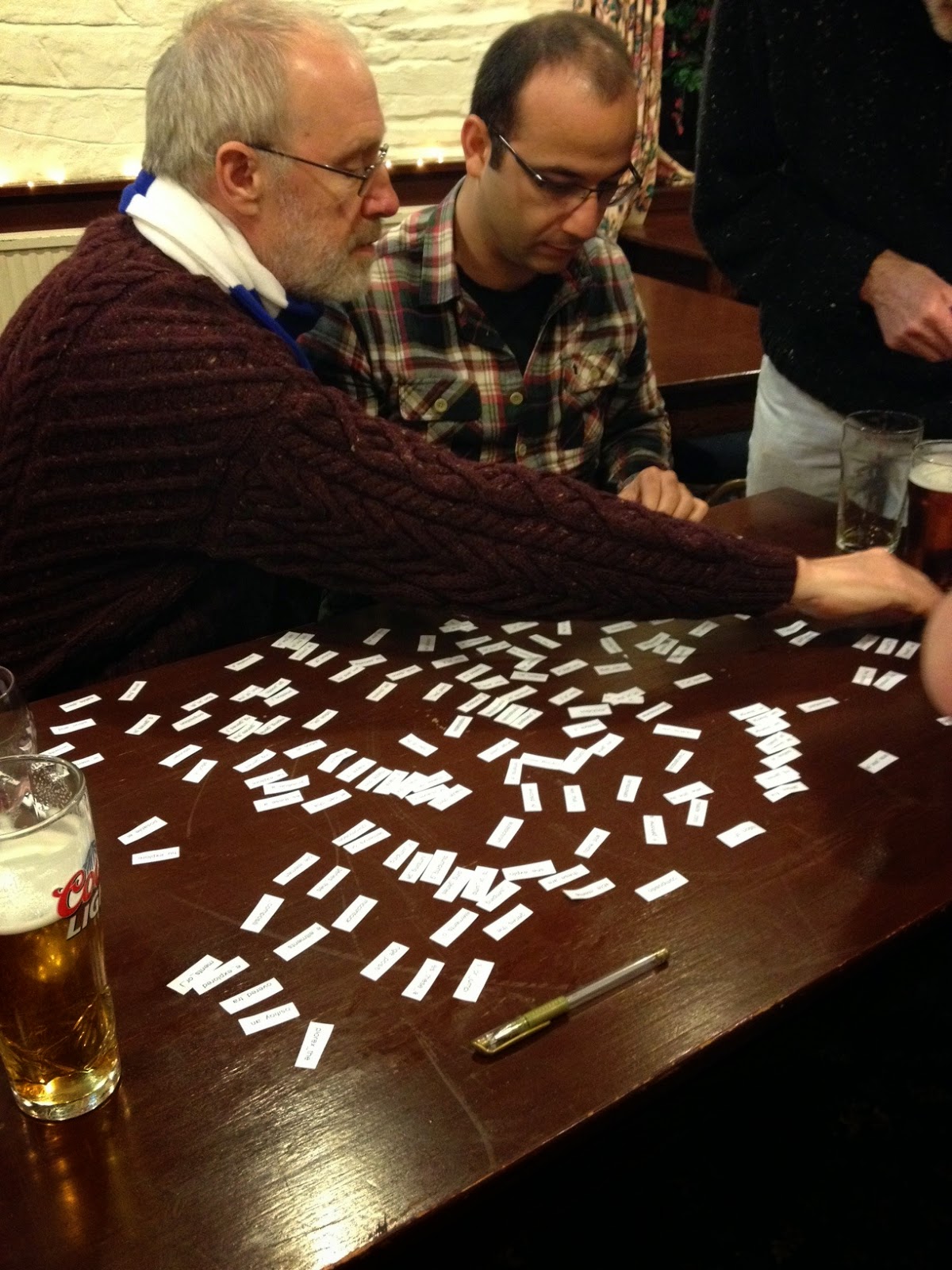 5) The Florence Nightingale data visualisation round
Finally the teams got to use a box of stuff (pipe cleaners, stickers, fluorescent paper, googly eyes, coloured pens) to make the most creative version of this year's HESA stats on women employed in higher education.

No trivia or celebrities in the quiz at all!
Posted by Amanda Clare at 18:46 No comments: